ระบบกักเก็บพลังงานในไทย
What is Energy Storage System?

First of all, for the past century of electricity for mankind, there are 3 main pillars that let electricity energy drive our world. Which are electricity Generation, Transmission and Distribution system. Our homes and businesses are powered by these 3 pillars using electricity energy. Until a recent decade, an innovation called Energy Storage System came along as a fourth pillar of electricity system and became reality due to recent technology and reduced price of lithium ion battery as the main method of energy storage system. What is Energy Storage System?

Energy Storage System is a set of methods and technologies used to store electricity energy. The need of Energy Storage System is due to imbalance of demand and supply for electrical grid. Primarily caused by recent increased portion of renewable energy sources. For instance, solar energy can supply during daytime when the sun is shining but could not during nighttime. There are many different forms of energy storage system widely researched and tested. The most common being battery (electric), Pumped hydro/reservoir (potential energy), flywheel (kinetic energy) and molten salt (thermal). Currently, cost and grid structure are main challenges for energy storage system to be implemented at a great scale. Energy Storage System can be applied in many different ways depending on the need of electricity grid. Main applications used are as follow.

Energy Storage System in Thailand is not totally a new thing. However, it was only developed in a larger scale recently and due to cost structure of energy storage system has dropped dramatically in the past several years. We start to see larger projects developed from both authority such as MEA, PEA and EGAT and from public companies.

For instance, Energy Storage System in large scale using unit as MWh (1,000 kWh) was recently put into commercial operation recently in late 2019 located in Rayong province having storage capacity of 1.5 MWh (1,500 kWh) using newer technology including lithium ion battery and energy management system developed by energy leading public company together with Hyundai Electric and ITL Engineering. Ultimately, there will be many more energy storage projects developed in 2020 and could exponentially grow in the coming years same as global growth rate prediction for energy storage mainly from overall price of lithium ion battery price reduction over the years. However, growth rate of Energy storage system in Thailand might be also depending heavily on government incentive support and innovation development that could be applied with energy storage system such as block chain, AI, machine learning, microgrid and EV charging station for wider usage in the country. Electrification is amongst ones of the Megatrends in 2020s which practically meaning electrify everything. At this moment, we could not deny the rise of electrical vehicle anymore.

And in the near future, internal combustion engine vehicle will eventually be replaced by this trend.

Not to mention other mega trends about green energy/renewable energy which are directly related with electrification trend.

Abundant renewable energy such as solar energy and wind energy will also be in needed. To summarize with more advanced technology, energy storage system would be another Megatrend inevitably. 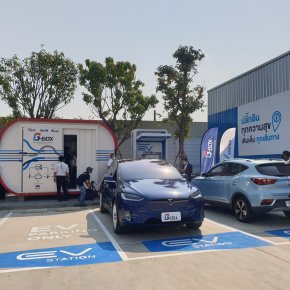